By May Parkinson, Reporter

On Wednesday, the House Judiciary Subcommittee on Antitrust will hear from CEOs Jeff Bezos of Amazon, Sundar Pichai of Google, Mark Zuckerberg of Facebook, and Tim Cook of Apple. The biggest tech CEOs of all time attended a hearing on July 30th, 2020. Sundar Pichai, Tim Cook, and Mark Zuckerberg attended the hearing being already accustomed to the hot seat, along with first-timer Jeff Bezos. This hearing was regarding anti-competitive trust laws. For over a year, top lawmakers in Congress have been investigating the four tech giants to determine whether the companies have abused their power and dominance in the online marketplace. Wednesday's event marked the culmination of that process and is the biggest hearing of its kind since Microsoft's Co-founder Bill Gates went to Washington D.C. in 1998. Here are some major takeaways from the hearing.

Jeff Bezos had a mixed first appearance before the Congress

Facebook CEO and co-founder Mark Zuckerberg was scrutinized by the House Judiciary Subcommittee because of the acquisition of, recognized as a company that could hurt Facebook, Instagram in 2012. Instagram is the 6th most popular social media platform in the world and the most popular photo-sharing application in the world. Zuckerberg was confronted by the Judiciary Subcommittee about internal company emails he sent about the acquisition of Instagram.

In an internal Facebook email, Zuckerberg stated that Instagram could be "very disruptive" to Facebook. An email from Facebook's chief financial officer referenced neutralizing a potential competitor, which Zuckerberg replied was part of the motivation.

Rep. Jerry Nadler said the emails showed Facebook viewed Instagram as a threat and, rather than compete with it, his company bought it.

In response, Zuckerberg did not deny he viewed Instagram as a threat but pointed out that the deal was approved by the Federal Trade Commission at the time.

Zuckerberg was also confronted about yet another internal Facebook email.

The awkward moment was brought to us by Colorado Democrat Joe Neguse, who pressed the CEO on a string of Facebook acquisitions that included Instagram and WhatsApp.

"Facebook also tried to buy other competitive startups," Neguse told Zuckerberg via video chat. "In fact as [subcommittee chairmen Rep. Jerrold Nadler] noted, you did tell one of Facebook's senior engineers in 2012 that you can, quote, 'likely buy, just buy any competitive startup, but it'll be a while before we can buy Google.' Do you recall writing that email?" 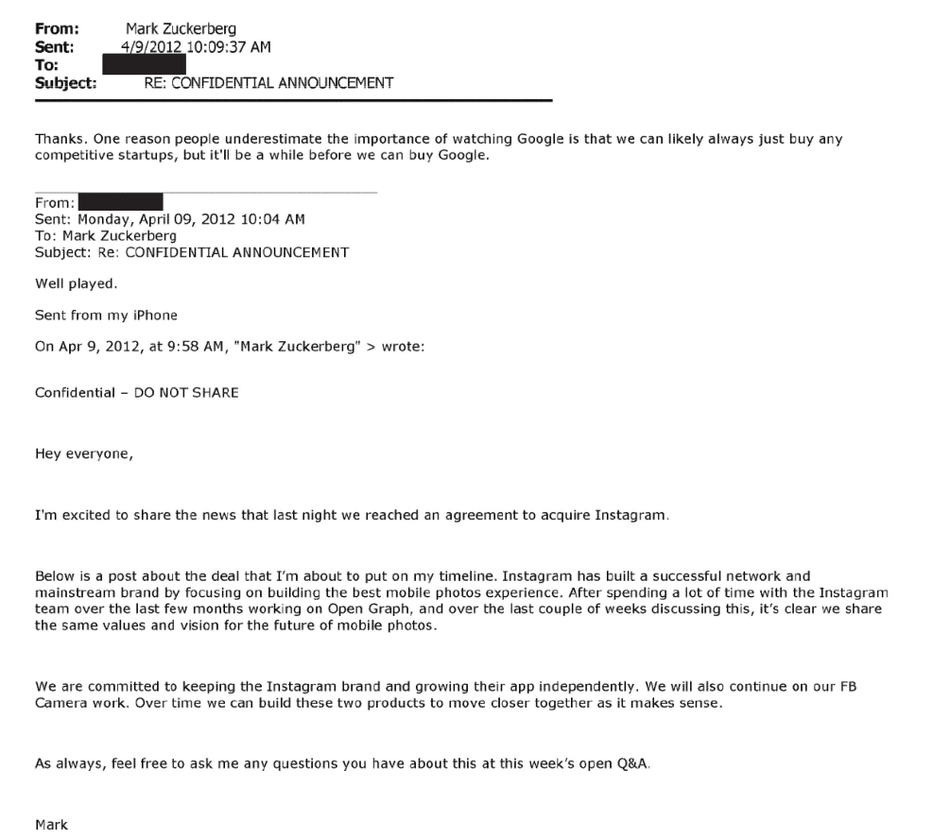 Zuckerberg's only response was an attempt to downplay the entire thing.

"Congressman, I don't specifically," he replied. "But it sounds like a joke."

"I don't take it as a joke," he responded. "You know as I review the email it was in regards to having just closed the Instagram sale, and the response from this individual, this engineer, to you was quote, 'well played.'"

“Facebook saw Instagram as a powerful threat that could siphon business away from Facebook, so rather than compete with it, Facebook bought it,” Nadler said. “This is exactly the type of anticompetitive acquisition that the antitrust laws were designed to prevent.”

All the tech executives sought to drive home the point that their companies are by America, for America.

Bezos referenced the "trust" Americans have in Amazon. "We need American workers to get products to American customers," he said in his prepared remarks.

"Apple is a uniquely American company whose success is only possible in this country," Cook said in his remarks, touting the number of US jobs it has helped create.

And the US battle with China for tech supremacy informed part of Zuckerberg's argument.

"If you look at where the top technology companies come from, a decade ago the vast majority were American," the Facebook Cheif Executive Officer said. "Today, only three survive from those top 10, and almost half are Chinese."

The partisan divide over tech returns

While Democrats largely went after the tech CEOs for their use of data and behavior toward competitors, Republicans during the hearing consistently alleged a pattern of anti-conservative bias by the tech companies, despite little more than anecdotal evidence.

GOP lawmakers' strategy seems clear: to encourage the media to cover claims of ideological bias as equivalent in gravity and stature to antitrust issues. But researchers have consistently failed to turn up evidence of systemic bias on the part of the platforms' technology.

At one point, Rep. Gregory Steube, a Florida Republican, confronted Google CEO Sundar Pichai, portraying as an example of bias that may have been a simple technical problem. Steube said his congressional campaign emails to supporters, including his parents, have often been blocked or sent to Gmail's spam folder.

"There's nothing in the algorithm that has anything to do with political ideology," Pichai said. "We do get complaints across the aisle."

While there were some fireworks between Democrats and Republicans, the overall drama of the hearing was restrained due to the highly technical nature of some of the questions.

Many consumers will not have the context to understand why some of the exchanges, which were the product of a lengthy investigation into the nuts and bolts of their businesses, mattered.

But that doesn't necessarily mean the hearing was a failure. The ultimate impact of it will depend on what steps Congress takes or recommends to address the antitrust concerns that led to the hearing in the first place.